In 1992 I had just arrived in the USA from China where I had been working for almost 4 years. I had started to work for a hotel group with about 4 properties in the Twin Cities area. Not long after starting, the city of St. Paul, Minnesota was the venue of an exhibit of the Titanic. My hotel was one of the sponsoring hotels. As part of the promotion we invited corporate accounts to a special reception and a chance to visit the Titanic exhibit. The reception menu was replicated from the first class menu served to the passengers aboard the maiden voyage. I saved a copy of the promotional material which was printed for the occasion. The material featured the two vessels of the White Star Line; the SS Olympic and the RMS Titanic. On the reverse side was the celebrated menu. I used the various dishes served to cook up the following poem.

The title of the poem recalls the original film made in Black and white with the title “A Night to Remember” starring Kenneth More and Honor Blackman which was released about July 1958. The RMS Titanic sank 105 years ago on April 14th, 1912.

A BITE TO REMEMBER

The night we remember,

When the Titanic sank deep down

Their dinner on that fateful night

And then a sherbet mousse

One came from the Volga

Cream of barley in a bowl

And too, consommé Olga

Third course served was from the sea

Not brought in a terrine

Poached salmon on a gilded plate

With sauce of mousseline

Fourth course were the entrées

With lamb and sauce of mint

And duck with Calvados,

These were paired with veggies

All of them were there.

To clean the palette sixth, was served

The choices two but simple

You only had to say

On a bed of wilted cress

Exquisite dining for the price

You could not ask for less

Eighth course was a salad

This was such a tasty dish

The ninth course was a cold dish

Goose livers all the way from France

Where food is Ooh la la!

Watch out for your belly

Of fruit and cheese.

Is one tight squeeze

And finally a bourbon tasting

Best to sip it slow

And on that note I’ll say farewell

This was a fine last supper of some who rest below. 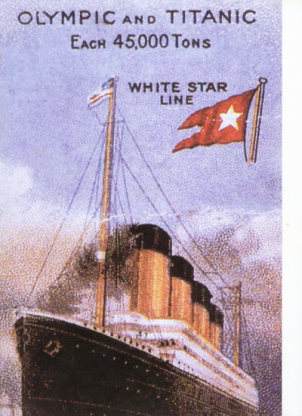 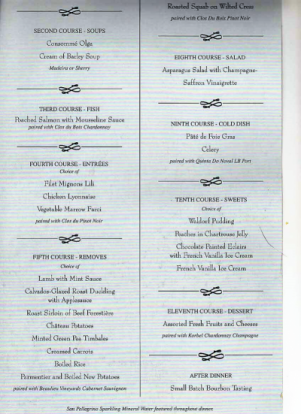 This is a replica of the boarding pass issued to Mr. Edward Ernest BNye (Elizabeth Ramell) from Orange New Jersey.