I had no flowers

until I painted a vase

in which to put them 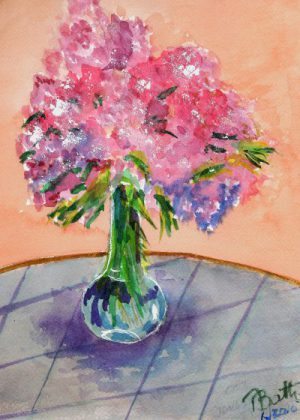 I have reached the regrettable realization that I may have squandered my life. I did a quick count recently and figured that I have visited about 66 countries, and lived for more than 3 years in 3 of them. During this time I completed 14 corporate moves (relocations) and have changed my address more than 23 times. I should have settled on a profession that would have kept me in one place with no packing and unpacking. When I think of the time I have spent bundling my life into and out of boxes. Ah well, it's all water under the bridge. But I am grateful for the experience. At the end of the day I will be able to say with a certain authority, "been there, done that". A note about this site’s Header Image The Header image for this site is of the Smith Avenue High Bridge. The bridge was built in 1889 and carries Minnesota State Highway 149 across its span of 2770 feet, 160 feet above the mighty Mississippi River. The picture was taken from the river looking to the north-east and downtown Saint Paul. The bridge is about 1040 miles from New Orleans. One of the reasons I like this view is that I come from a city which has a spectacular bridge. It’s the Clifton Suspension Bridge http://www.ikbrunel.org.uk/clifton-suspension-bridge which spans the Avon Gorge and the River Avon in Bristol, U.K. It’s about 1350 feet long and stands 245 feet above the river below. Sadly it has claimed the lives of more than 400 people who have committed suicide by jumping from the bridge. As a side note, not all attempts were successful. two small girls thrown off the bridge by their deranged father survived the fall when they were fished from the river by the crew of a passing pilot boat. The bridge was opened in 1864 and was designed by the 24 year old architect, Isambard Kingdom brunel. It took 35 years to complete.